Find Things To Do Near Me

SeatsForEveryone.com is the premiere source for finding things to do and events near me along with largest selection of discount tickets available.  We have great ticket options for concerts, theatre, sports, tours, art museums, hotels, festivals, and more.

Music and concerts are always exciting and fun.  When you find yourself looking for upcoming concerts near me make sure to check out all of our options.  Whether you are seeking rap concerts near me or tickets to the symphony orchestra, we have all of these events available. Don't miss the amazing concerts at The Strand Theatre.

The best ticket options for sports are right here.  We have RedSox Tickets, the Dodgers schedule, and many more choices.  If you need NBA tickets, then check out our Nuggets tickets and Boston Celtics schedule.  There are other expansive options as well like a Dallas Cowboys parking pass, Jets parking pass, or minor league hockey like Icemen tickets.  If they are playing a sport somewhere and you want to attend – chances are we have the tickets.

Use Promo Code SEATSFOREVERYONE for An Additonal Discount

The Theatre is conveniently located in historic Providence and within walking distance of the Dunkin Donuts Convention Center and the Providence Place Mall.

Providence Performing Arts center does offer visitors the opportunity for curbside drop off right in front of the entrance to the theatre.  There is also metered parking available in the immediate vicinity.

Several parking garages and spaces are also available.  Here are a few locations nearby:

Designed by two architects from Chicago, the Providence Performing Arts Center opened on October 6, 1928.  The property first opened under the name Loew’s Movie Palace.  The Loew’s intention was to sell tickets to theatres, and this drove the amazingly opulent design and initial cost of $2.5 Million for construction.  On opening day more than 14,000 people attended to see a man play the organ and a performance of “Excess Baggage”.

The role of TV and a declining economic activity couple with hurricane damage created a rough patch of years around mid-century for the Providence Performing Arts Center.  The City of Providence almost had to demolish and tear down the theatre in the 1970’s, but now the property is part of the National Register of Historic Places.  The year 1995 kicked off a major restoration of the theatre to its original beauty.  Throughout 1999 and 2000 specialists and everyone involved were able to restore the exact original ornate beauty and details of the theatre that make it so wonderful to this day.

Today the Providence Performing Arts Center is open year round and a destination for many of the nation’s leading performances such as The Lion King.  The Encore Series and Broadway Series both contribute the bulk of the performances at the theatre.  There are opportunities for community outreach programs and group events consistently at the PPAC.  The theatre also accepts donations and makes available a President’s Club which provides an exclusive experience for those that would like to join.

PPAC is also very active in the local and regional communities with its scholarship programs.  Each year 30 students from Rhode Island can earn a scholarship for summer arts training and education.

Previously known as Loew’s State Theatre and Palace Concert Theatre, the Providence Performing Arts Center is a multi-use theatre found in Providence, Rhode Island. The renowned theatre is located on 220 Weybosset Street. Housing more than 3000 seats, the theatre was constructed as a movie palace and opened in the year 1928. It hosts quite a number of events that include films, plays, concerts and Broadway Shows.  You can catch some of the most amazing shows such as Dear Evan Hansen and Hamilton and Hadestown.

What is now known as the Providence Performing Arts Theatre was opened on the 6th of October, 1928. The theatre was designed by Chicago’s George and C.W. Rapp, architects who had earned themselves a reputation by designing remarkable movie houses across the United States. The main inspiration behind the building of the theatre was to sell tickets to theatres. Upon the completion of the theatre, approximately $2.5 million had been spent. Excess Baggage was the first film to show on the theatre and it starred William Haines. Accompanying the film was Joe Stoves playing the Robert Morton $90, 000 organ. More than 14,000 people thronged the theatre and a majority of them were drawn to view the magnificence of the theatre’s interior, the grandeur of the chandeliers and the stunning marble.

Following its opening, Loew's State Theatre hosted a number of premiers for some rather prominent movies that included Bwana Devil, the first 3D feature film. Featuring more live concerts than movies, the theatre was operated under the name Loew's Theatre between the years 1950 and 1972. After 1972 up until 1975, the theatre was operated under the name Palace Concert Theater and was basically a theatre for rock concerts. Some of the popular events that were hosted in the theatre in 1973-1974 include Lou Reed, The Doors, Jackson Browne, The Bee Gees, The Kinks, Aerosmith, Fleetwood Mac and Van Morrison.

Although the theatre was successful for quite a while, the popularity that the television was gaining over the years resulted in a considerable decline of attendance. It was damaged in the 1938 and 1954 by hurricanes and was almost brought down in the 1970s. The owner of the building asked for a permit to bring it down but the mayor pledged city funds to the tune of $1 million to save the theatre. In 1977, the theatre was included in the National Register of Historic Places under the name Loew’s State Theatre. Between 1978 and 1982, it was operated as Ocean State Theatre.

Over the years of its existence, the Providence Performing Arts Theatre lost its magnificence and visual allure. In 1999, renovations to restore the theatre to its original beauty were commenced. This was the first phase of the Auditorium Restoration Project in which the ceiling areas, the walls, the balcony and the loge’s front edge were restored to their former glory. The 2nd phase of the restoration was completed in 2000 where the ceiling and the walls all through the auditorium were completed. Vertical and full color LED marquee were added with the aim of modernizing the theatre. It was also re-carpeted in the same year. 2002 saw the installation of a computerized HVAC system. Smoke and heat detection equipment as well as additional sprinklers were added in 2003. Plasma TVs and various other audiovisual equipment was also added as part of the facelift.

You can choose to travel to the PPAC either by public means or in your private vehicle. There are several transportation options such as the Providence Performing Arts Center Rally which provides shuttle transport services to and from the theatre. There are also buses that conveniently get you to the theatre, saving you the hustle of gas and parking costs.

Parking is pretty convenient at the Providence Performing Arts Centre. There are lots of parking facilities located near the theatre and are accessible from all directions. Some popular options include the SP Plus, Civic Center Parking Garage, In Town Parking and Snow Street Lot 3 among others.

Rhode Island is filled with natural beauty and splendor. Not only does it offer the visual pleasure of watching nature's wonders, but it also offers entertainment.

Visiting this part of the world offers a great mix of entertainment. Not only can visitors enjoy the traditional attractions like museums, art galleries, and theaters, but they can also enjoy the natural sights and wildlife, including whales and dolphins. These animals are abundant in Rhode Island, and it can be very relaxing to see them up close and personal.

The major attractions include the James Island Natural History Museum and Aquarium. Here visitors can see live cetaceans, including humpback whales, and then dive into the waters to swim with the creature. Other attractions include the Dunkin Donuts Center and the Provincetown Botanical Garden. Visitors who want to soak in the natural scenery will want to visit the Aquarium and the James Island Natural History Museum.

The Rhode Island Theater is known for its historic productions, while the Dunkin Donuts Center and the Dunkin Donuts Company offer hundreds of delicious donuts. With these attractions and thousands of other events each year, visitors can spend their vacation enjoying the sights and sounds of the area.

Location and lodging are the next thing to consider when planning a vacation. While there are a few accommodations in the area, a vacation in Rhode Island will always be exciting, so spending a night or two in one of the area's lodging accommodations can help you feel a little bit more at home during your stay.

These accommodations can range from private villas to bed and breakfasts to event venues. After you've seen the sights, explored the waters, and dined on some of the region's delicious foods, perhaps you'll want to entertain yourself at a restaurant and watch the famous jugglers perform for your entertainment.

Whether you're coming to the city or the island, getting a close look at the beauty of the surrounding locations will really help you get an idea of the location and attraction of Providence Rhode Island. While most tourists would likely never venture off the beaten path, the natural beauty is enough to make any traveler to this part of the world spend a little time exploring the local towns and attractions. 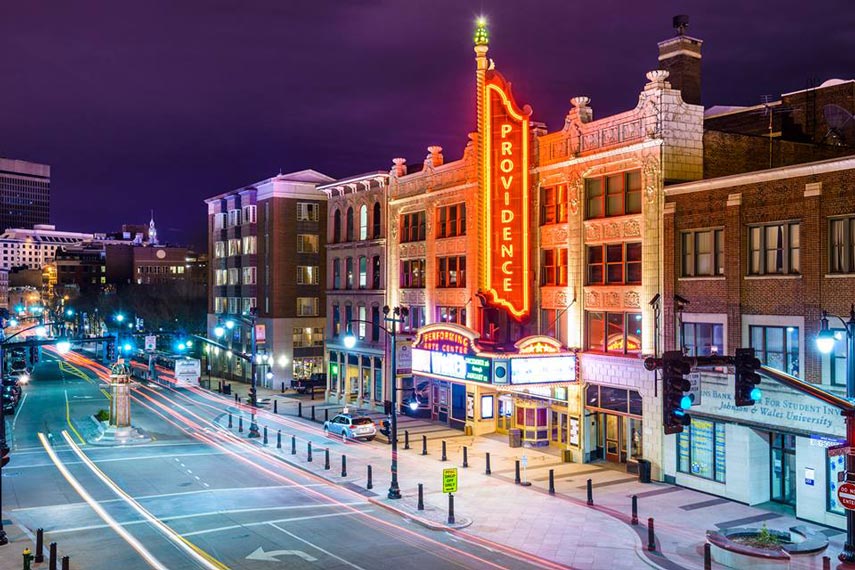