Things To Do In San Francisco

The Orpheum Theatre in San Francisco is one of many amazing things to do in San Francisco.  The Orpheum joins its contemporaries the Curran Theatre and the Golden Gate Theatre to offer to the world the most amazing and up to date performing arts performances.  These include wonderful acts such as Hamilton and Dear Evan Hansen and others as well like Moulin Rouge and Harry Potter.

There are also other wonderful performing arts options in San Francisco to include the San Francisco Opera, SF Ballet, and the San Francisco Symphony.  You can find these at Davies Symphony Hall and the War Memorial Opera House.  If you are in LA we can help you find tickets for Hollywood Pantages or the Ahmanson Theatre.

Don't overlook all of the art museums and other events such as the Sundays A Drag Brunch.

Save 42% on San Francisco's Muni and Cable Car rides plus admission to the 4 best attractions with CityPASS. Shop Now!

To Kill A Mockingbird

Tucked in San Francisco – California’s Civic Center District, the Orpheum Theatre is an elegant venue with a magnificent interior architecture and an exceptional exterior. The theatre officially opened its doors for the first time on the 20th of February, 1926 and was part of the numerous theatres designed by the renowned architect B. Marcus Priteca for Alexander Pantages, the theatre owner. The first show that was hosted at the venue was Oh! What a Bride featuring Sydney Chaplin on the screen. This was then followed by six vaudeville acts on the stage. The theatre was constructed primarily to provide a showcase for Pantages, an influential and powerful vaudeville impresario at the time.

The theatre, still considered one of the best in the region, was equipped with a stunning Robert – Morton 4 manual and a 26 rank organ. The organs were opened by the renowned organist Henri Lebel. Following its official opening, the Orpheum Theatre rose to become one of the most popular theatres in the California region. The famous vaudeville house was however later sold to RKO. On the 6th of September in 1929, the theatre was reopened and referred to as the New Orpheum Theatre. For 35 years after its reopening, the theatre stayed a first run movie house.

In the year 1948, the Orpheum Theatre was acquired by Metropolitan Theatres. Five years afterwards, it was subleased to Cinerama. During the 1970s, the theatre was temporarily shut down to be reopened later in 1977 as a live theatre. As a live theatre, the Orpheum Theatre didn’t achieve much success and was closed again barely five years afterwards. After its closure in 1981, Orpheum Theatre was bought by The Shorenstein Hays Nederlander Organization. The organization made some major changes that have contributed to the success of the theatre for more than two decades now. It has transformed the theatre into one of the most exciting venues in San Francisco, hosting some of the best Broadway shows nationally.

In as much as the Orpheum Theatre was grand in architectural design at the time of its opening, a number of changes had to be made along the way to keep it up to the modern standards and suitable for the new events it was to host. After its acquisition by The Shorenstein Hays Nederlander Organization that planned on turning it into a venue for Broadway – Caliber productions, the Orpheum Theatre had to be renovated. Its new owners raised $20 million directed at the renovation of the venue. The renovations were commenced in 1997 and completed in March the following year.

The Orpheum Theatre is located at the 1192 Market at Hyde, Grove and Eight Streets in San Francisco’s Civic Center District. The parking spaces available for visitors are Orpheum Parking, Park and Shop as well as LaSalle Court Ramp.

Originally the Pantages Theatre, the Orpheum Theatre opened in 1926. The building was designed by the acclaimed architect B. Marcus Priteca. The Orpheum used to be a home to standard shows but in the 1970s, it cost $20 million to make the theatre capable of running Broadway shows. The place is owned by the SHN. Carole Hays and Robert Nederlander also own two other theatres; the Golden Gate Theatre and the Curran Theatre.

The schedule for the theatre in terms of musical is pretty beefy in the next few years and there are only good things to come for the people living in San Francisco. A list of the musicals coming to the theatre is mentioned below:

Hamilton and the Orpheum

Hamilton: the Musical is by far one of the best musicals of our generations. Everything from the songs, the acts, the stage and the actors is adored by every person sitting in the seats. The musical has been a tremendous success all over America. The musicals has been making its way through the country since 2015 but it first started in San Francisco at the Orpheum Theatre. There were a few preview performances and it eventually opened officially on March 23, 2017.

But, that's the past. What all theatrical fanatics will be overjoyed to hear is that Hamilton is coming back to the streets of San Francisco next year. The producer for the play Jeffrey Seller told the world that the musical would be returning to the Orpheum theatre in early 2019. In an interview, he was overjoyed with the crowd's reaction to the play.

"I was blown away when the ticket-holders who had gathered outside the SHN Orpheum Theatre prior to the first preview cheered and cheered when the doors opened and they could finally take their seats. Hamilton at the Orpheum Theatre is gorgeous, powerful and kinetic. We look forward to returning and staying there for a longer time in the early 2019".

The musical was highly appreciated in the Orpheum during its first run and it's expected to do even better the second time around. Hopefully, the musical will stick around in the streets for a long time...

If you are planning a trip to the Orpheum Theatre, originally known as the Pantages Theatre, may not be fruitful if you cannot try the best food served around the theatre itself for the spectators. If you are not familiar to the area around the theatre and cannot figure out what to eat when you are at the Orpheum Theatre, the idea of trying something new without having seen the review first scares you then you are not alone. You may not only be looking for a place to eat, you may be looking for confirmation that what you may be wanting to eat is worth it. You cannot tell people about a trip and not mention the food so to make your story worth listening to, we will make your food story worth telling as well by recommending the best and the most affordable places to eat in the area.

A trip to the SHN Orpheum Theatre grabs your mind and emotions with wonderful theatre and performing arts, so you might as well hit it out of the park with the choice of food and restaurant.  Here are some options:

Being quite close to the Theatre, it would hardly take you two minutes to reach your destination. It is claimed to be one of the best places to eat at while you are in the vicinity. It is a place that serves you the best modern cuisine in an exceptional classic place right with in the historic place referred to as the Hotel Whitcomb.

The first thing that would give you a hit would be the interior of the restaurant. You would be entering through the Tavern Piano Bar with a vaulted ceiling, Tiffany Glass décor and the rich wood paneling.

The focus of the restaurant is to make sure that they only use the farm fresh local products that are of the best quality, particularly the ones which are prepared with a hint of Euro Asian feel. The items that they have on their menus are not just from one part of the world but they try their best to get you the items from all over the world, which may be the reason that The Market Street Grill was voted the best restaurant in 2010.  Theatre patrons and visitors alike are sure to be pleased with this restaurant near the Orpheum Theatre.

On a location, only 0.2 miles from the Orpheum Theatre, it would hardly take you 5 minutes to reach the restaurant that guarantees you the meal that you would surely remember for quite a long time. The Perennial makes a striking balance between the sophistication in terms of the environment and the satisfaction of their customers, not only with their décor and interior but also with their menu. They offer the best classics on their menu, with fun twists in which they reinvent what is being served for years.

The Flying Falafel is a place that doesn’t try to deceive you with soft mellow music or fancy and lavish décor. They do one thing, and one thing only, serve outstanding food. The venue isn't too fabulous, but their Mediterranean palate more than makes up for it. The prices are reasonable, the services are great and obviously, amazing food. Definitely a great place to dine after a night out at Orpheum.

San Francisco has robust transportation systems with the BART system, other trains, trolleys, bike rentals, and of course options such as Lyft and Uber.  Plan ahead and your trip to SHN Orpheum can end up being quite the adventure filled with easy transportation, excellent dining, brilliant performing arts, and perhaps a nightcap of some sort.

Once On This Island Tickets:  https://www.seatsforeveryone.com/Once-On-This-Island 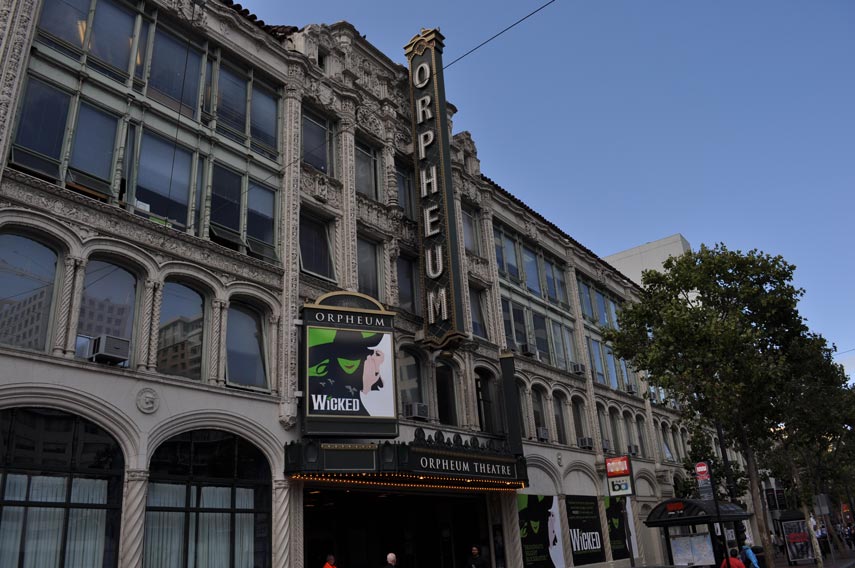 The ceiling at The Orpheum in San Francisco. from r/ImagesOfCalifornia